It was a miracle that the devastating earthquake of January 12, 2010, did not result in any serious injuries among those at Maison des Anges. The damage to the building was considerable, however. All of the children had to be evacuated because the home was in danger of collapse.

Once the initial shock had worn off, the greatest problem was to ensure that the children’s basic needs were met. There was a lack of drinking water, primarily, but also medication, diapers, and other essentials. The first donations that came in were used to buy food. The home’s management and staff were very grateful for the show of solidarity and spontaneous support from around the world. The Swiss Humanitarian Aid Unit (SHA) set up two large tents in the grounds of Maison des Anges, and also secured a water supply.

The Swiss organization Timoun subsequently joined forces with Help a Child e.V. in Germany and the home’s management to plan the rebuilding of Maison des Anges with the aid of donations.

Demolition work began in April 2010, along with planning for the new building. All concerned were keen that the new home would be designed so that it provided sufficient sanitation facilities for the children and staff. It was also to meet the children’s needs as effectively as possible, compared with the old building. Wherever possible, we worked with local firms so that donations could also benefit the Haitian economy. In this way, donations from Switzerland and Germany provided employment for builders, carpenters, roofers, and painters, etc. Cabinetmakers were also commissioned to make children’s beds, and cupboards.

Moving into the New Building

Rebuilding Maison des Anges took just under a year. The children who had spent this time sleeping under canvas were able to move into the new building in March of 2011.

Unfortunately, Maison des Anges was not spared the cholera outbreak, and the home discovered a few individual cases. A member of the Help a Child staff was on site to train and support our own staff in compliance with hygiene measures, and some of the children were immunized against cholera.

More information on the earthquake in Haiti on January 12, 2010, can be found on the corresponding Wikipedia page. 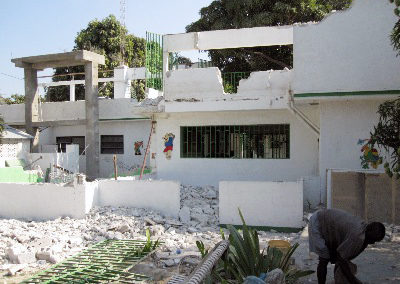 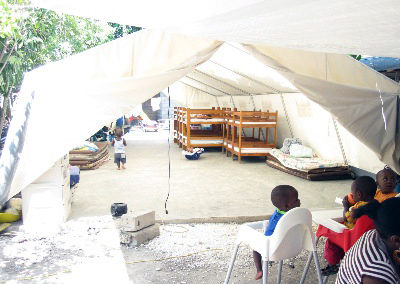